A video introduction to ‘Who is Daniel Witthaus?’ was recently put together by award-winning filmmaker Jonathan Duffy and uploaded to YouTube.  Better known for his documentary, The Doctor’s Wife, charting he and his partner’s journey as a gay couple into rural Queensland, Jono wanted to highlight other people making a difference in the LGBT community.  In Jono’s own words:
“Gay rights advocate and education activist Daniel Witthaus is an extraordinary man with an extraordinary mission to eliminate homophobia in Australia. This passionate Victorian from Geelong embarked on an incredible 38 week journey in 2010, all around rural Australia, taking his anti-homophobia training, called Beyond That’s So Gay’, to schools, organizations and individuals. This video entitled “Who is Daniel Witthaus?” is the first in a serious about influential GLBTIQ people who are helping to make the world a better place.” 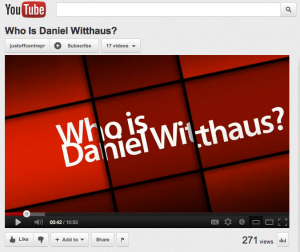