Who The #@*! Is Daniel Witthaus?!
What on earth would possess a man to drive for 266 consecutive days around rural Australia to challenge homophobia one cuppa at a time?  And in an openly gay truck called Bruce?
Join Daniel Witthaus, author of Beyond Priscilla and Beyond ‘That’s So Gay’, as he shares an adults-only, roll-in-the-hay, behind-the-scenes look at what it takes to support LGBTI young people and challenge homophobia in schools and rural communities for almost two decades. 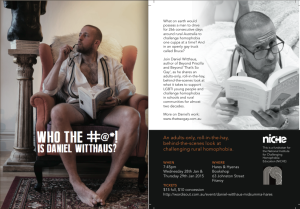