In early July Daniel travelled to his hometown of Geelong, joining the PFLAG Geelong group for one of their monthly meetings.  He took the time to read from Beyond Priscilla, with snippets also from his first book, Beyond ‘That’s So Gay!’.

The local media were interested in this trip home, with Daniel appearing in both The Geelong Advertiser and The Geelong News. 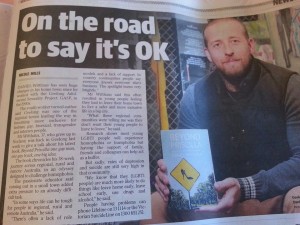